Women in sports have had to combat hostility, societal pressure, and ignorance to assert their presence on the field. Now, almost 41 years after the passage of Title IX, we have seen women take many mile stones in the world of sports. Today, we salute Lisa Salters on her birthday for shining brighter than the field lights on a Monday night. 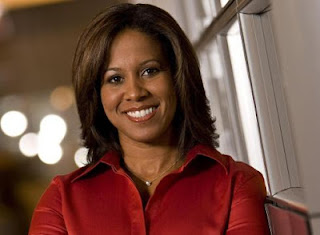 Born in King of Prussia, PA, Lisa Salters grew up to play collegiate basketball at Penn State University. After graduating with a degree in Journalism she began to make her dreams a reality. Working her way up, Salters began covering stories for ABC News in 1995. Once assigned to Los Angeles, she became the West Coast correspondent for ABC News. Salters reported breaking news including the Oklahoma City bombing trials, the Matthew Shepard murder, and the O.J. Simpson trials. 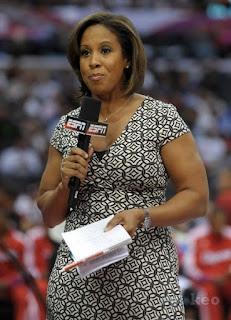 In March of 2000, Lisa Salters began reporting for ESPN. Over the years she  has contributed many in depth reports on athletes and world events. To date, this includes two Olympic events in 2004 and 2006 as well as SportsCenter reports in Kuwait. Great work does not go unnoticed. Lisa Salters was the chosen "Best Feature" winner for the Gracie Award from the Association for Women in Radio and Television in 2009.
Currently, she is counting down to her second season of sideline reporting for Monday Night Football on ESPN and guests for E:60.

She has had many accomplishments over her 25 year journalism career, but she is a charitable person as well. Salters has lent her talent and influence to the young women of Rwanda, assisting with The Girl Effect initiative, which teaches young girls about journalism. It is not easy to stand against a wall of men with a microphone in your hand, but we thank you Lisa Salters for making it look easy. You can catch what she has to say on Twitter @saltersl.