It's OK for Me to Like "Scandal,"
My Favorite Feminist Said So

Some of the Gladiators started counting down while brushing their teeth this morning. As the hours tick away until it is time for Olivia Pope to gloss across the screen looking fierce in white, stans will be Tweeting "Sneak Peak" videos and putting up their "Don't call/text me after 8pm" FB posts. On the on the other side of the aisle, you have the people who hate Scandal so much they decided to write a post about how it's not "brilliant" after watching roughly two episodes. [I also must add that Black women are not a monolith. Saying "I am a Black woman and I don't like Scandal" does not make you an exception, it makes you silly. Trust me, it's OK for us to disagree on a TV show.] 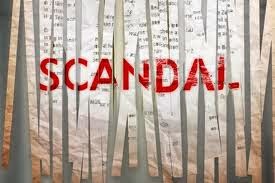 In case you missed it, "Scandal" is the popular network show about Washington D.C.'s top "Fixer" Olivia Pope (played by Kerry Washington), who in helping getting the President elected, ended up in a romantic affair with him. After leaving the White House she went into the trenches to solve the problems of elite world leaders, Congress people, etc. with her fierce motley crew. In other words, Olivia Pope is the HBIC.

When people "hate" Scandal, as I have come to observe, they usually cite two reasons: 1) They hate that a Black woman is a mistress to a White man - making Sally Hemmings references and other balderdash statements or 2) It's just not that great -people over emote, Kerry's cry face is too much, why is there 70's background music for everything? They also seem to base their hate on one or two episodes, or talk about how much they hate it every week while talking about every character (video below). I get it, it's a thin line... *cue music.

If the overall make up isn't your cup of tea that is fine, but to tackle the first point, I went to My Favorite Feminist. This amazing woman works in D.C. and will snatch your wig in her fly ass HIJAB over some sexist, misogynistic shenanigans faster than you can say "Hey Sexy." In short, she's pretty awesome. When I mentioned that I was slightly surprised she didn't have a huge problem with "Scandal," she saw the same thing I see when I occasionally watch - a character who transcends her race into full persondom. You know like a serial killer who loves his family, or a meth cooker who... anyway you get it. Rarely, is this luxury allowed for women in entertainment, and especially women of color.


"I've never seen a character like Olivia before on TV or really the big screen in mainstream shows and movies. It's her flaws and her mistakes right next to her amazingness, all her human contradictions, that attract me to her. A show that treats a lead black woman as a human."  - My Favorite Feminist

Knowing a thing or two about writing scripts, the show would be boring and ridiculous if Washington's character was really just "a booty call." She actually spends more time telling the President it's over and it's the gut wrenching conflict people love so much.

Aside: I mean the man is sneaking off into forests and dodging White House cameras. Pope has the President sooooo bad, HIS WIFE invited her to dinner. Later that night his wife was all I hope you're good so now you can get back to being President. Say wha???

Oh, and never mind the mysterious deaths, "Who do you work for" plot twists, and bad ass fashion. As if I needed more reason to not believe/trust the government. *Le sigh.

Personally, I don't watch "Scandal" religiously because I cannot keep up. I don't have a TV and usually hit up a NYC Happy Hour on Thursdays. Plus, the intensity of each episode makes a marathon impossible. Trust me, I tried, my heart said, "Girl get up and turn off Hulu if you want to make 30." With all that said, I have seen enough to know that "Scandal" is worth a whole lot -maybe not an Emmy, maybe not every person's love, but a few pages in history for sure. That makes me proud, and to that I say go on and get your swirl on. :)