'Tis the Season... for Sisterhood

You cannot be a feminist if you hate women. Honestly, it's about the only hard rule. I rarely use the word "hate" because it is such a strong word, but I have to talk about it. I have to talk about the insidious nature of hate. I have to talk about how hatred toward women is also rarely called out as such, until it shows it's a** in an act of violence- a la Chris Brown for example. While he has become the poster boy for the He-Man Woman Haters Club: MMA Addition, his attitudes towards women did not start the day we saw photos of Rihanna's face. Ray Rice did not just get a little out of control that one time, and Stephanie Moseley was not just shot and killed by her husband because she "must of done something wrong."

Loving women is hard. Hell, we struggle every day just loving ourselves. Every magazine says we should be so thin, so thick, so tall, and if you're not tall enough get them Louboutins. If your hair is not long enough go buy some. Let's be clear, Korean shop owners have been putting their kids through college off Black women alone for the past 2 decades. Meanwhile, all we have to show are trust issues and a messed up hairline. Even with the natural hair movement, all curls are not created equal and some are graded. This is not victim blaming, this is a charge to change the culture.

I had to change.


As a daddy's girl in pretty much every sense of the word, I didn't really see the value of female relationships until the later years of high school. I was something of a Régine a la Living Single without all the priss- waiting for a knight in shining armor. Well, after he knocks you off the noble steed a few times, you wise-up and buy your own damn horse. Then you find a group of horse riding ladies to wreck havoc on some poor unfortunate souls.* Ok, that was a bit dramatic, but the point is after I shifted my relationship priorities, I felt more balanced.

Loving and valuing women, does not mean you hate men. FTR: That is not feminism. It means that if you see your sis getting harassed on the street you ask if she's OK. It means we call out Don Lemon for quizzing rape victims on how to prevent rape. It means, my house will be available if my girlfriend is in an abusive relationship and the shotgun will be close at hand. 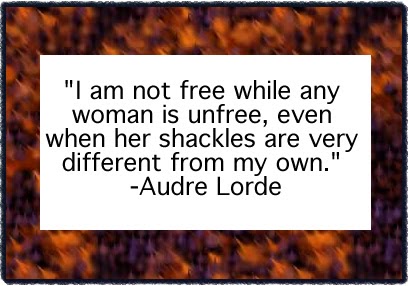 While I have had a few memorable romantic rendezvous, it is the friendships I fight for that have changed me, helped my career, and shown me real love. The truth is, loving women should be easy. There are so many of us, and collectively, we do everything except time travel. When the culture does not show us for who we really are- choosing instead "Real Housewives," Make-over divas, and thots- we all suffer. We become harder to love and we harden our hearts to each other judging whose feminism is better. We have to be there for one another. When we say #BlackLivesMatter, women should be included.

From the Author
*Single women as a whole, are not Disney villains, but Ursula was really trying to show Ariel what's up in a tough love auntie kind of way. IMHO

Also, check out Truth in Reality, an organization dedicated to fighting against negative portrayals of women of color in the media.

Oh yeah, men can be feminists too. Got something to say, hit me on Twitter!!!